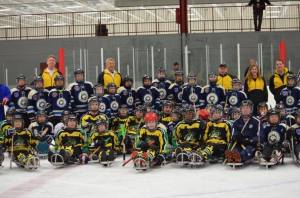 On Saturday, March 21 the Huskies Hockey Club played host to the Hornets Sled Hockey Team at Canlan Ice Arena in Romeoville to raise funds for the program which serves kids ages 5 to 20 who have physical disabilities yet are determined to play ice hockey. Romeoville’s Mayor Noak was even on hand to drop the puck for the first game between the squirts/peewees and the Hornets. In all eighty Huskies players competed on two teams comprised of squirts/peewees and bantams/midgets.

Event coordinator, Jessica Crowley stated, “The Huskies felt this was an amazing opportunity to support the Hornets and teach our children that anything is possible. Individual players raised money through sponsorships ranging from $50 to $200, teams donated the remainders of their fall slush funds, and the Squirt Central States team conducted a penny war raising $200! The event was a great success.” 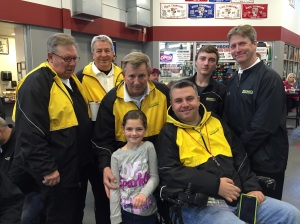 JJ O’Connor, founder and general manager of the Hornets, agrees, “They did a wonderful job and raised close to $6,600; the Huskies had raffle items, T-shirts for sale and chuck-a-duck between periods and many, many wonderful volunteers to help make the day great. Our team plays able-bodied teams on a regular basis as fundraiser games to support the program, but what was unique about this fundraiser game was the generosity of one little 7 year old girl named Campbell Boisselle who donated all the proceeds from her lemonade stand.”

When Campbell’s brother, Pierson (Huskies PeeWee Central States team), signed up to play in the Hornet’s game she told her mother, Amy, that she wanted to be involved too. Campbell spent that Saturday afternoon in her neighborhood selling glass after glass of lemonade at her stand. By the end of the afternoon, Campbell had $10.67 to contribute to the fundraiser. “We do many games with many wonderfully generous people,” said O’Connor, “Many hockey organizations all over the state of Illinois have played against and supported the Hornets, but when you meet a little girl like Campbell…you can’t help but think that the world has a great future. I think she gives hope to everyone that the world is full of good-hearted, generous people. 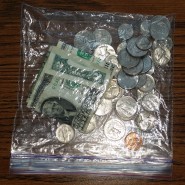 Amy Boisselle stated, “Campbell was so excited about being able to help that she plans on having several lemonade stands throughout the spring and summer to raise more money for the Hornets; we are even making a professional sign for her lemonade stand!”

Campbell isn’t the only one making plans to continue fundraising. Jessica Crowley noted that, “It was such an amazing experience that will leave an impact on everyone that was part of it. Hockey families are one-of-a-kind! The Huskies are already looking forward to next year’s event!”

“The Hornets Youth Sled Hockey Team operates completely through the generosity of people like Campbell and the many generous teams and organizations like the Huskies all over the state,” said O’Connor, “And the Hornets would sincerely like to thank all of them.”

The Hornets Sled Hockey Team consists of a great group of kids ages 5 to 20 who have physical disabilities, yet are determined to play ice hockey. As almost all children do, they want the opportunity to participate in sports, to feel the camaraderie of being part of a team. In some cases it’s not even to play hockey – for some, it is their only freedom outside a wheelchair or walker. 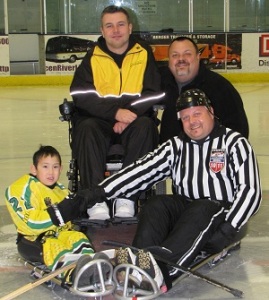 The Hornet Program is completely free to their players. The families of the Hornets have had to endure near catastrophic medical expenses for their children. The Hornets attempt to keep this program free of charge for all of these great kids. The program is fully funded by donations and 100% of the money collected goes directly to equipment and ice time.

The Hornets was started eleven years ago by JJ O’Connor (pictured on the right, seated center), a former hockey player who sustained a catastrophic injury in a hockey game, to give these children a wonderful opportunity to enjoy the sport of hockey. Interested in making a donation? Click HERE. For more information, please contact JJ O’Connor at DUBLJ95@aol.com.

Check out the YouTube page to see these young athletes in action.