Sylvain Turcotte and Norm Janis change with the times, treasure their run as coaches

Sylvain Turcotte started coaching in 1984, at his high school alma mater in Montreal. Turcotte was 22 years-old at the time, leading a team of 16-, 17-, and 18-year-olds.

“It was quite the experience,” Turcotte said. “Practices were at 6 a.m. three times a week and just like when I was playing, kids had to leave school early on game days because all the English schools finished before us and games could not start past a certain time. We made it to the Quebec championship game that year, yet lost.”

Flash-forward to the 2015-16 season. In the northern suburbs of Chicago. Turcotte is still coaching and still loving his time on the bench.

He is now hockey director at the Glenview Park District, a post he has held since June, 1987, when he moved to the U.S. from Montreal.

Turcotte’s first coaching job in the U.S. was with the Chicago Young Americans (CYA), where he coached until 1996 – winning multiple state championships and a peewee Tier 1 national championship in 1995.

In 1988, he also coached the Glenview Stars mite AA team, which he is still coaching today – and he’s won multiple state and Silver Stick championships at that level. In fact, “we are still to this day the only American team to ever win the Silver Stick mite AAA championship.”

Turcotte is a local coaching institution, a legend on the bench.

And he’s not the only longtime coach on a Glenview bench this season.

Norm Janis played locally in the 1970s, including time in Wilmette; with the Chicago Nordics (in Waukegan), a Junior A team in 1976; for the Skokie Chargers, a MidAmerica semipro league team in 1977; and then at St. Norbert’s College in 1978.

Janis transitioned from competitive player to coach. His first coaching experience was with Wilmette as an assistant coach for a Squirt B team.

He stayed coaching in Wilmette for a couple of seasons before moving on to the Deerfield Falcons, coaching a Squirt AA team. “(That first Deerfield team) was a highly talented team (and) we won many tournaments, including the finals of Silver Stick,” he said. “If I remember correctly, this was the first squirt team from Illinois to ever win the Silver Stick (title).

“At that time the regionals were played in Minnesota before moving on to the finals in Sarnia, Ontario, where we played four Canadian teams.”

After coaching at the Falcons, Janis moved on to coach a Squirt Minor team during the inaugural season with the Chicago Young Americans.

“I took a few seasons off when my first daughter was born and returned to coach with the Glenview Stars at the start of the 1992 season,” he said. “I stayed with the Stars until 2004. During my time there I mainly coached Pee Wee and Bantam teams, winning numerous NIHL, state, and holiday (weekend) tournament (titles).”

Janis also took over a mite silver team halfway through a season that took second in state.

“My hat (goes) off to all the coaches who coach mites; that certainly takes a special patience level,” he said, laughing.

Janis left Glenview in 2004 and went back to the Falcons for six years, mainly coaching at the Bantam gold level.

He then spent four years coaching for the Wolfpack, including the top Pee Wee team.

Janis is back at Glenview this season, “and enjoying every single minute,” he said.

Turcotte, 53, who lives in Buffalo Grove, said coaching at the youth level has changed dramatically over the last 25 years and continues to evolve. “There are no more cookie-cutter solutions to problems,” he said. “(Since) the game has evolved so much, coaches have to keep up with new techniques as well as off-the-ice when handling (of) children.  What was acceptable and widespread 20 years ago may be viewed as offensive today.”

Turcotte noted that today’s youth players are better than years ago. “The tools and opportunities they have now compared to 25 years ago to develop and improve makes it so that these kids can have basic skills a lot sooner,” he said. “We do need to promote creativity at all ages (though), so that they can achieve their full potential.

“With the skill set there at a younger age, (players now) can do more early in the development to promote creativity. Small area games and battle drills have become the norm at any practice.”

Janis added: “Over the years, the game has changed dramatically; therefore, for me coaching has changed too. The game has become faster and much more creative. For me as a coach, I try to challenge my players to think differently, to think with more creativity. In the ‘old days,’ the game was played more in lanes, right wing, right lane, etc. This is not the case any longer. Now you have forwards changing positions and defense jumping up into the play.

“My practices today versus years ago have become much more upbeat (and) challenging, stressing creativity. Every practice includes 10 to 15 minutes of challenging small-area games.”

Turcotte’s coaching run includes winning the AAA (Tier 1) Nationals in Detroit in 1995 with the Chicago Young Americans, winning the Silver Stick International mite title with the Glenview Stars against a AAA Toronto team, winning the Ottawa Squirt World Championships and winning the peewee major Toronto Marlies tournament with Team Illinois and Don Cherry having to present the trophy and take a picture with us.

Turcotte’s coaching run has, of course, included many noteworthy players – many of whom have gone on to play college and pro hockey. Case in point, Craig Anderson, of the Ottawa Senators was on the Illinois Select team that Turcotte coached for two years.

He also coached Brett Lebda who played for the Detroit Red Wings and won a Stanley Cup in 2008. Turcotte taught Lebda from mite AA through bantam major at CYA.

Plus, Turcotte coached Danny Richmond before he stepped onto the United Center ice as a member of the Chicago Blackhawks. And, he coached Sam Calabrese for three years at TI and he went on to play at Notre Dame.

Janis also over the years has had numerous players who he has coached advance to play Junior A or Junior B in Canada, as well as NCAA Division I college, and some even landed playing time in the NHL. 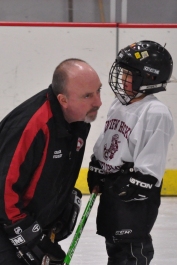 Turcotte was influenced, naturally, by his dad – also a coach. “I got my love of the game from him, but, (when I ) moved to the U.S., I lived with my uncle, Real, who founded the Turcotte Stickhandling Hockey School, and he showed me how to teach the game from the basic skills to the most intricate facets of the game.”

Turcotte said he plans to remain coaching “as long as they will let me.” He said coaching “keeps me excited and alive.”

“I love what I do; it is not work. I enjoy the journey every year and hope to do it for a while still,” he added.

Janis, 59, who lives in Buffalo Grove, added: “I enjoy every season that I coach. When you enjoy something so much, why would you plan on giving it up? I’m certainly not.”

Janis said his coaching highlight is not how many banners or holiday tournaments he’s won, “but (rather), giving back to the game.”

“What really makes it worthwhile for me is when you see a player you coached 10, 15, even 20 years ago and they still call you, ‘Coach.’ You know they still like and respect you, and you know that you had a positive impact on their life.”

Like Loading...
‹ 5 Ways Parents Can Be Supportive After a Tough Game
10 Reasons Why I Would Never Coach Minor Hockey ›