And then there were two, the same two that skated in the final game one year ago.

Semifinal games in the Red Division of the Illinois High School Hockey Tournament were, well, relatively easy wins for both Providence Catholic and New Trier Green.

The No. 2 Celtics opened the action Monday night, March 13, at The Edge Ice Arena in Bensenville with a 5-0 victory over No. 3-seeded Loyola Gold. No. 1-ranked New Trier Green then dismantled No. 5 Benet Academy, 8-2.

So, Friday night at the UC, it’s the Trevians vs. Celtics, once again. The puck drops at 7 p.m.

The Providence-Loyola clash was silent for the first period, as neither team struck. But then, with just under five minutes remaining in the second period, the Celtics scored what proved to be the game-winner. They padded that lead with two goals in less than a minute, with the first coming at 2:55 of the second.

The between-periods motivation talk from Gold’s coaches didn’t work. Instead, the Celtics netted two more in the final period for the celebration and a repeat trip to the United Center.

But can the Celtics topple the Trevians?

Odds say, no.  After all, Green has been nothing short of a juggernaut all season.  And they have already defeated Providence in all four games the teams have played this season, most recently 4-0 on Dec. 29, 2016.

The 2016-17 Green Trevians might just be the best team in school history and maybe even state history. Green has been the No. 1-ranked team all season and has not lost to an Illinois high school team all season. Their only setbacks have been against midget-level and elite teams, plus once to Carmel High School of Indiana.

Green has 48 wins over Illinois high school teams this season – and is riding a 31-game winning streak. The Trevians defeated Lake Forest 7-0, then Stevenson 4-0 in their first two state tournament games. Benet became the Trevians’ third victim in the 2017 state tournament.

Sure, Benet grabbed a 1-0 lead in the first period, but Green answered about a minute later on a backhand goal from Tommy Cahill. The Trevians scored again less than a minute later for a 2-1 lead.

Green would not be stopped on this night. Heck, these Trevians were barely slowed.

“Green is the most complete high school team in maybe the last 10 (to) 12 years,” said Glenbrook North head coach Evan Poulakidas, who was in his 17th season coaching locally in the high school ranks. “(All four Green forward lines) can score; their defense manages the puck better than people give them credit for; and their goaltending is very good and does not get enough credit at that position.

“They are big, fast and play angry. Throw in a great coaching staff and you have one of the great teams in many, many years.”

Stevenson coach Tom Wood said, “This Green team is the best team I have seen in high school hockey.” And Wood has been coaching local; high school hockey for 15 years, this being his first as the school’s head coach. He also was a standout player for the Patriots before graduating in 1998.

“There was a Fenwick team when I first started coaching that I usually talk about as the best team I saw. They were big, fast, and strong,” Wood added. “This year’s Green team reminds me of them, but that Fenwick team didn’t have the depth (Green does). In preparing for our (elite eight round) game against them, I went through their history this season and only three teams in the SHL had a lead against them. One of them was us, and it was gone about 30 seconds later.”

Wood said the Green’s depth is the key.

“In my 15 years coaching at Stevenson, I have only had two guys with over 100 points (in a season),” whereas Green has three and a fourth with 99, Wood said. “New Trier is lethal on the power play, so you have to (stay out of the penalty box). You have to play defense on your own power play because they are so relentless on the penalty kill. Their defense is mobile and does a great job throwing stretch passes. Defensively they get no credit, but forwards back-check relentlessly and the defense doesn’t allow a lot of odd-man rushes.”

Wood added, “Bob (Melton) is an incredible coach who adapts well to whatever you are doing. He makes special teams a nightmare and you aren’t going to out-smart him.” 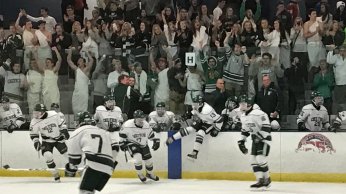 The Celtics’ drive for the school’s first-ever high school hockey state championship is anchored on goalie Ryan Iaciancio, who was a stud in Catholic League play and beyond. In league play, he only allowed 15 goals in 13 regular-season games, all wins. He also had four shutouts.

“Ryan Iaciancio is going to need to play very well for the Celtics to have a shot,” Wood said.

The Celtics feature a dynamic offense, too, led by Jake Rott and Jake Vennetti, who totally 61 and 56 points, respectively, in 22 Catholic League regular-season games.

“Vennetti and Rott are going to need to capitalize on the limited opportunities they will get for the Celtics to upset New Trier,” Wood said. “Disciplined defensive hockey has been how teams have kept it close against New Trier. Providence can put the puck in the net as they proved on a very good defensive team in Loyola Gold in their semifinal match up. The only way they have a shot is to keep New Trier off the scoreboard. If there is a hole in New Trier, it’s that they take penalties. If Providence can score on those power plays and keep numbers back 5 on 5 to limit the New Trier offense then they have a shot.  Anyone can win a one-game series.

“As a coach I look forward to seeing how (Providence coach) Nick Iaciancio will try to slow down New Trier’s offense and match up against New Trier’s depth.”

The Celtics were 6-0 in their run for the Kennedy Cup.

So who takes the victory lap at the UC, New Trier once again or will Providence finally break through?

I’m sticking with my prediction from earlier in the season: This is Bob Melton’s 20th season at New Trier, and I think this will be his 12th state championship.

One thing is certain, as Melton noted heading into the championship game, “(It) should be a very exciting game with some of the best offensive players in the state.”

Wood added, “I think New Trier’s depth will prove too much and the Trevians will win their fourth title in the last five years. I like New Trier (to win) 5-2.”

The girls’ state championship will be a battle between co-op Glenbrook South and Loyola after the Ramblers edged Latin School of Chicago 4-3 in the semifinals, while GBS coasted past Fenwick, 7-0.