By GoHolyCross.com ~ The Holy Cross men’s hockey team has announced its team awards for the 2016-2017 season. The awards were presented at the team’s annual banquet at the Hogan Campus Center on Friday, May 5. The Crusaders also honored their three seniors Logan Smith, Brett McKinnon and Mike Barrett. 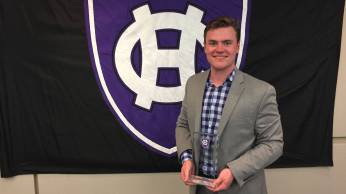 Senior assistant captain Mike Barrett earned the team’s MVP Award. He appeared in all 36 games and posted 11 goals and 16 assists for a career-best 27 points. He was third on the team in goal scoring and second in point scoring. He also tied for second on the team with five power play goals. Through the duration of his career, Barrett played in 147 games which are sixth all-time in the history of the program. He finished his time as a Crusader with an impressive 44 goals and 55 assists for 99 points.