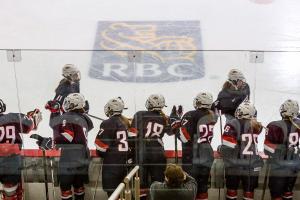 Competition to be held Aug. 17-20 in Lake Placid, New York

USA Hockey announced that 22 players who participated in the 2017 USA Hockey Women’s National Festival have been chosen for the 2017 U.S. Women’s Under-18 Select Team that will compete in a three-game series against Canada from Aug. 17-20 at the Olympic Center in Lake Placid, New York. The roster includes Illinois’ Anne Bloomer (Chicago, Ill.) and Abbey Murphy (Evergreen Park, Ill.)

The 2017 USA Hockey Women’s National Festival took place Aug. 8-14 at the Lake Placid Olympic Center in New York. The U.S. Women’s Under-18 Select Team will train together until the series against Canada opens on Aug. 17.

The nine different states represented on the 22-player roster include Minnesota with 10 representatives, Massachusetts with three, and Texas and Illinois with two apiece. California, Missouri, New Jersey, North Dakota, Pennsylvania are also represented. The full roster and staff listing is available here.

For the complete schedule and information regarding the U18 Series, click here.

NOTES: The three-game series vs. Canada is an annual event between the two countries and has been held each August since 2007 … Members of the media can register for a U18 Series credential here. … Tickets to the three-game series will be available for purchase at the arena and each game will be streamed live at HockeyTV.com … Reagan Carey (Colorado Springs, Colo.), USA Hockey director of women’s hockey, is the general manager of the 2017 U.S. Women’s Under-18 Select Team… Joel Johnson (White Bear Lake, Minn.), associate head coach of the University of Minnesota women’s ice hockey team, was named head coach of the U.S. Women’s National Under-18 Team for the 2017-18 season on June 14, 2017… Joining him as associate coach is Maura Crowell (Mansfield, Mass.), head women’s ice hockey coach at the University of Minnesota Duluth, and assistant coach Courtney Kennedy (Woburn, Mass.), associate head women’s ice hockey coach at Boston College.