Lane Tech is ‘Light Years Ahead of Last Year’s Team’

By Administrator on September 8, 2017

“We’re light years ahead of last year’s team in every category. Our core group consists of 13 returning skaters, all of whom are familiar with our expectations and systems, and all of whom share a common goal: playing in the United Center (next) March,” said head coach Jason Newman, who is in his sixth year overall coaching and his third at Lane Tech.

“I think we definitely got the most out of the group we had last year. We won twice as many games as the previous season and our players gained more and more confidence as the season progressed,” Newman said. “We finished strong and showed ourselves that we could compete with some of the better teams in the state. We know what we have to do in order to give ourselves an opportunity to win a state title. All of the elements are finally in place, it’s just a matter of execution at this point.”

The Indians are very deep at every position, and the team only lost four seniors over the past two seasons to graduation. All of the players who were forced to play varsity as freshman and sophomores are now juniors and seniors, most of whom already have two full years of varsity experience. “I think that experience will prove to be invaluable this season as all of our players know what to expect at the varsity level,” Newman said.

Noah Fletcher, a senior defenseman (Lakeview HS) is key, a leader on and off the ice. He won the IHSHL North Central Defensive Player of the Year Award last season and expectations are high for another strong season from him. “He’s dynamic offensively and can do everything from quarterback the power-play to kill penalties. I expect him to be one of the top offensive defensemen in the league this year,” Newman said.

Here’s a look at some of the other key Lane Tech returners:

Newman said there are three newcomers who will have key roles in the team’s success: Nathan Radtke, Aleksandar Rick, and Jacob Wolf. All are seniors.

“All left Lane after their freshman seasons before I took over the program,” Newman said. “The three of them spent last season playing for the Chicago Bruins Midget Major team. They’re great friends and leaders in the locker room and will, undoubtedly, make a huge impact for us this season. We’re excited to have all of them back this year.”

Radtke (DePaul Prep) brings a strong physical presence, but he’s also a constant scoring threat when he has the puck in the offensive zone, Newman said. “He plays the game with a level confidence that most high school players don’t have. I expect him to be one of the top forwards in the league this year. He’s also playing for the Bruins again this season and is our only double-rostered player.”

Rick (Taft) also is a physical force. “His rocket shot gives him the ability to put the puck in the net and he’s also one of the best pure skaters we have,” Newman said.

Wolfe (Lane Tech) has everything you’d want from a defensive perspective, along with a great shot and excellent skating ability, Newman said. “He leads by example on and off the ice, and is as hard-working of a player as I’ve ever coached. We expect him to be one of the top all-around defensemen in the league this year.”

“We had more kids than we ever expected come to our training camp and we’re very excited to field three teams: Varsity, JV Green (#1), and JV White (#2),” Newman said. “The amount of interest and ice availability were both total surprises to us as we literally added the third team a few weeks ago.”

Lane Tech has 12 solid forwards, all of whom are scoring threats, Newman said. 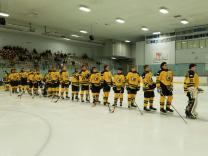 Junior Eric Wamboldt (Taft) is the team’s top goaltender. As a sophomore last season, he got his first start at Maine in mid-January, which ended in a 1-1 tie. “His performance that night was a turning point for our team as he earned the starting goalie position and led us down the stretch for the remainder of the season,” Newman said. Junior Brendan Devine (Northside Prep) and freshman Eli Reese-Wirpsa (Lane Tech) will battle for the other goaltending spot.

Devine is entering his third year in the program, while Reese-Wirpsa “was a total surprise at camp (who) wasn’t on our radar, and appears to be very mature beyond his years so far,” Newman said. 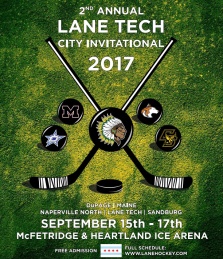 Naperville North is the defending champion.

“We had a great response from last year’s participants and all of them accepted invitations to return. The only team from last year that isn’t participating is Notre Dame Blue since they’re not fielding a team this year,” Newman said. “We’ll be participating in both the CLS Gator Cup, followed by our 2nd-annual City Invitational. Both tournaments will give us an opportunity to see what we have, and to work on some different line combinations.

“Our goal is to win both tournaments.”

Ross Forman has written about Illinois high school hockey for more than 15 years, and is the only sportswriter to have covered Illinois High School hockey every year during that stretch. He played locally and then at Indiana University before becoming a referee. Ross was a referee for the State Championship game several years ago at the United Center. Contact Ross by email at Rossco814@aol.com

Like Loading...
‹ Ask the Official: Does rule 624(b.1) {Icing} apply to the 15 year old ONLY age classification?
Teams Reserve Your Date as the Rockford IceHogs Dream Team! ›