The key is in moderation, and knowing what the body needs to perform

Thanksgiving is a time for spending time with family, doing a little relaxing and, of course, eating.

For hockey players who will compete on the ice over the holiday break, they can still enjoy Thanksgiving and a great meal, but they need to be smart and eat in moderation. Carrie Jaworski, MD, Director of Primary Care Sports Medicine and Melissa Faubert, DO, Primary Care Sports Medicine Fellow at NorthShore Orthopaedic Institute offer some advice for navigating the holidays as an athlete.

“Loading up on pumpkin pie and stuffing is not going to allow them to be ready to compete to their maximum potential,” Jaworski said. “Focus on the basics: lean protein, fruits and vegetables. Not to say they cannot enjoy the casseroles or pies, but limit to small serving sizes.”

Faubert noted it’s good for an athlete to stay focused and make time to work out around Thanksgiving, which can be difficult with travel and family commitments.

An early-morning workout prior to the Thanksgiving meal can be very beneficial.

“Exercise provides endorphins to help an athlete feel awake and revitalized for the long day ahead,” Faubert said. “Also, most people won’t want to work out after spending hours in the kitchen and after a heavier meal. Many cities offer short run/walk races on Thanksgiving morning which can be a great idea to get the whole family out for some exercise before the festivities start.”

One major key to eating around Thanksgiving — and, frankly, any holiday — is sticking to well-balanced meals. Lean meats, fruits and vegetables should be consumed at every meal.

“For their recovery meal, athletes should eat a small snack that has some carbohydrates to refuel your body’s stores, as well as protein to help rebuild muscle,” Jaworski said. “Some turkey on a slice of whole grain bread is a perfect recovery snack. And when all the Thanksgiving leftovers are gone, chocolate milk works great as well.”

Jaworski advises athletes not to use supplements since they are not regulated by the FDA and may contain ingredients other than what is on the label.

“We also tell our athletes not to try new foods before a game,” Jaworski said. “They don’t know how their body is going to react and if it will slow them down or send them running to the bathroom. It is best they come up with a meal routine that they’ve tried out during training and stick to that on game days in order to be at peak performance.”

In order for an athlete to help limit negative side effects from a Thanksgiving meal, Faubert said eating in moderation is important.

“There is a common myth that tryptophan, a protein found in turkey, causes drowsiness and the need for that post-Thanksgiving meal nap. However, the amount of tryptophan in turkey is even less than what is found in chicken,” Faubert said. “The real reason people get tired after their Thanksgiving turkey is the large amount of food consumed. The body focuses all its energy on digesting the food and makes you feel like you need a nap. By not overfilling your plate, you can avoid the post-meal sleepiness and stave off the holiday pounds as well.”

As far as when an athlete should eat prior to a game and how much food they should consume, Jaworski suggests eating a small meal at least one-and-a-half to two hours before the puck drops. That gives the body time to digest and start using the food for energy by game time.

“Their meal should include adequate protein and carbohydrates and be low in fat as fat takes longer to digest and can make them feel full and bloated, slowing them down during the game,” Jaworski said. “Avoiding processed sugar is also important to prevent a sugar crash during the game.” 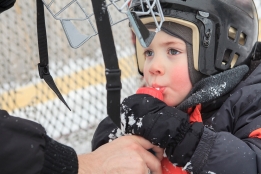 With so much emphasis on what types of foods to eat and how much, hydration sometimes takes a back seat. It shouldn’t, though. Drinking enough fluids is paramount because dehydration can affect performance, Faubert points out.

“We recommend athletes calculate their sweat rate by weighing themselves immediately before and after their normal workout,” Faubert said. “For every pound lost during exercise they should drink 16 ounces of water to replace losses plus match the fluid amount they drank during exercise. For example, if an athlete lost two pounds during his or her workout and drank 10 ounces of water during the workout, he or she should drink 42 ounces of fluid within the hour of completing the workout to replace losses.

“During a workout, we recommend an athlete just drink to thirst,” Faubert said. “Overhydrating can lead to minor performance issues such as being slowed down from a full stomach of water to more serious problems like hyponatremia.”

Abiding by these suggestions — eating well, hydrating adequately and working out — Thanksgiving should be just another day for any athlete.