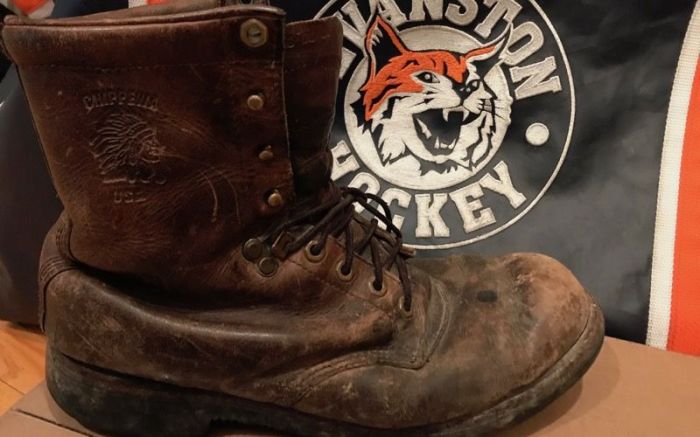 In hockey, there is no shortage of traditions. Player handshakes after every game. Tossing hats onto the ice after a hat trick. Lifting a stick to acknowledge the crowd. Playoff beards.

Among the most memorable for players, however, is the post-game object that’s handed out to that game’s most deserving player. Everyone in Chicago knows about the championship belt the Blackhawks passed around during their 2010 Stanley Cup run. Hats and shovels have also made an appearance during other NHL teams’ post-game interviews.

It’s a tradition that virtually all teams – from the pros to youth teams – continue to this day. The same is true for Evanston Hockey.

So, it got us thinking: what objects do Evanston Hockey coaches hand out and why? Not surprising, there are some creative ones in this bunch. Read on to learn more.

Stinky Boot
Perhaps you have seen a work boot lying around the rink and wondered what it’s doing there. It’s Coach Jimmy Kahn’s “work boot,” that’s given to the hardest working players of the game or to reward things the coaches have been emphasizing that game, week or month. And, yes, that boot is legit. “I worked in them every day from when I bought them around 2001 until a few years ago,” Coach Jimmy said. One boot goes to one of his 10U (squirt) team 1 players and the other is with a 14U (bantam) team 1 player.

Sweater Time
Most youth jerseys are relegated to backs of closets or parent’s basements. But Coach Deon Kidd found a great way to resurrect his jerseys to recognize offensive play and hard work for his 12U (peewee) 3 team.

His junior jersey from his year with the Boulder Bison goes to the player who creates active team play with assists and goals. His jersey from the year he played pro for the Hannover Scorpions is known as the hardworking jersey. He wants to recognize hard work because he knows what it means to put in the extra effort. “I always had to put in the extra time on the ice and off the ice to achieve my dream,” Coach Deon said. He added that he likes the idea of handing out a post-game item – which wasn’t common on his European teams – because “it is a great method to bring the team together and teach life lessons of speaking up and making a big decision.”

The Belt
Dave Crews introduced a traveling championship wrestling belt for his 12U (peewee) 1 team. It’s given to the player who worked hardest during the game and the recipient is decided by the previous “champion” from the game prior.

The 10U (squirt) 2 team also hands out a WWE wrestling belt to the player with the biggest impact or effort in a game. The previous winner also passes it on to the net player and says something about their teammate’s play during the game. Assistant Coach Greg Sprenzel explains that the team has started a chanting tradition of “Put it on! Put it on!” once the belt is handed off. The player who receives the belt has to wear it over their shoulder when they exit the locker room. But players better not forget the belt for the next game. If they forget it, they have the same punishment as forgetting a piece of equipment.

Game Puck
From the earliest ages, a game puck brings pure joy to budding hockey players and fans. Coach Jimmy and Coach Tim Riley look to hand out a game puck to the player who exhibits the most offensive skills during a game. Although Coach Jimmy’s favorite games are team wins when everyone contributes and the coaches can’t identify only one or two players to recognize.

Coach Greg was a recipient of a few game pucks during his youth hockey days and said, “It was great to be recognized for my effort and hustle with an item that I could use to remember and reflect on how well I played that game.”

Perhaps the most poignant story of handing out a game puck has to go to veteran Coach Don Howard. One season, he had a large team of 20 players, many of them new to hockey. He said that the newer players figured they had almost no chance at a game puck, while there were a few strong players who deserved them daily.

After one game toward the end of the season, one of the newer players who struggled during the season made a few strong plays that stood out. Coach Don said that this player didn’t score a goal, didn’t make a pass for a goal, didn’t forecheck or backcheck at a pivotal moment but he did grow as a player and got better. He then handed the puck to the player who jumped up and was amazed. 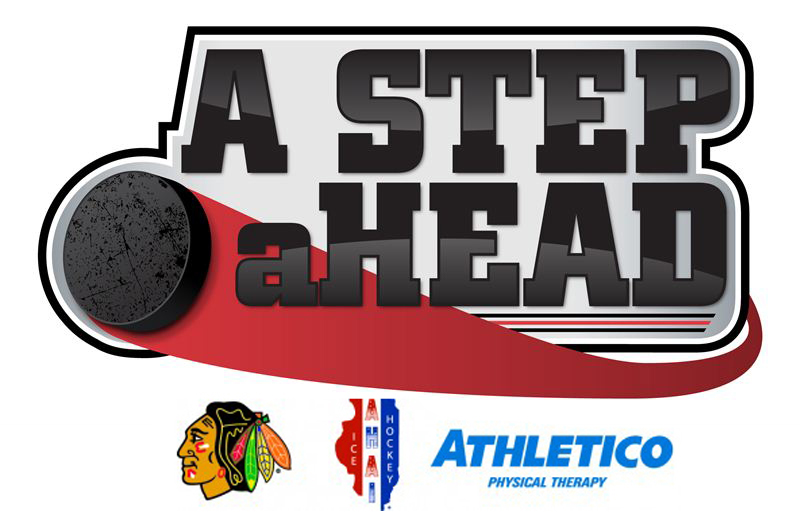