Blues Midget 18U Center Blake Vaca Treasures His Best Buddies On, Off The Ice

The Chicago Blues Midget Major CSDHL team carries a 23-18-5 overall record, but has lost four of its last five. Certainly not the way any team, at any level wants to streak into the playoffs.

“This season has been tough; we haven’t had as many wins as we would like. But, coming down to playoffs, we are getting strong and really melding as a team,” said Blake Vaca, a left-handed-shooting junior center who lives in Wood Dale and attends Addison Trail High School. And yes, he also skates for the AWFM Renegades – a mix of players from Addison Trail, Fenton, Montini Catholic, and Willowbrook High Schools – and the defending Combined Division state champions.

The 5-foot-7, 145-pound Vaca, in jersey No. 66, has skated for the Blues for nine years, starting as a mite. He has been an AWFM varsity player for three years.

Vaca first skated years ago for the Addison Flames.

He now skates alongside wings Tyler Gut and Kyle Hogan for the Blues.

“A personal highlight of this season with the Blues is scoring a short-sided goal against the Bruins in a game that we had a good chance of winning,” Vaca said. “Also, on my high school team, being named an All-State player was quite exciting.

“I’ve played for the Blues for so long because I love the kids I’ve played with and most importantly the coaches I’ve had have taught me so much – coaches such as Alfie Turcotte, Chris Imes, Jeff Jones and Justin Maciuk, (along with) my older brother, Ricky, who has been a coach for the past few years.”

Vaca said the strength of the Blues is having eight returning players from previous championship-winning teams together, thus the crew is strong, he said, “and we are building on our newer players to get the team in-sync with our style of play.”

Vaca said his personal career highlight was in a semifinal game three years ago, when he scored the overtime, game-winner against the Sabres. And the Blues won state that year, too.

“This particular game was a highlight for me because our team at the time was all 2000s, and one ‘99 goalie. But most of the teams in the league were mostly 99s, but we won, and went on to the state game.”

The team then went on to play in Nationals.

“Going to Nationals has been an experience of a lifetime – and to go three times with the Blues; I feel is quite an accomplishment,” Vaca said.

Vaca is an all-around player. “I like to get into tough battles in the defensive zone and make offensive plays in front of the net,” he said. 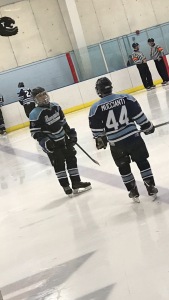 His hockey influences?  Well, that’s easy to answer:  His older brother and coaches. Plus, he added, “my parents keep me grounded to know the best choices to make, and (they) are at all the games to support me. Even after my dad suffered a stroke last year, first day out of the hospital he was at my game supporting me and the team. His strength influences my game and future in the sport.”

Vaca also has played volleyball, and said that sport helps him stay conditioned for hockey.

Away from sports, Vaca is a member of the school’s Best Buddies program, which works to change the world for people with intellectual and developmental disabilities through one-to-one friendships, leadership development and integrated employment.

Best Buddies is as meaningful to Vaca as a game-winning goal.

“I’m in Best Buddies because I have always felt like a role-model for younger kids. I thought this would make a difference, and yes, I definitely feel as though I am making a difference,” Vaca said. “I’ve made a lot of friends (through Best Buddies) and (a) most memorable moment is when my buddy is able to go to my games and is cheering me on. It’s a great feeling to hear him cheering me on, and he has asked me to help out on his team as a coach.”

Vaca is shooting to be the president of the school’s Best Buddies program during his senior year.

Around The Rink With … Blake Vaca

Favorite NHL Team: Chicago Blackhawks
Favorite NHL Player: Steven Stamkos
Favorite Sport (other than hockey): Football
Favorite Pro Athlete: Marshawn Lynch
Favorite app: Snapchat
Favorite TV Show: Gotham
Favorite Sports Movie: Miracle
Hardest Slapshot On Your Team: Nick D’Ambrose (AWFM); Sebastian Szeliga and Conal O’Kane (Blues).
Teammate Who Will, Someday, Make A Great Coach: Jason Stern (Blues); Nick D’Ambrose (AWFM).
Best Local Youth and/or HS Jerseys: Chicago Hawks
Worst Local Youth and/or HS Jerseys: Oswego
Nickname: Booshka (pronounced, Boo-shhhh-ka). “My mom started it, and said it was a term of endearment in Polish. But after looking it up, one of the descriptions was ‘Bad Ass,’ so I didn’t mind hearing her calling me that from the stands. None of the players have really named me anything, but I have been called ‘Fire Hydrant’ by a former teammate because he said it hurt like running into one if I was to check them.”
College Plans: Still undecided, but he’s hoping to go to a four-year university for a business degree.
Learned To Skate: At age 4.
Hooked On Hockey: “I have been in love with the sport of hockey ever since I started playing.”
Remembering … His First Game: “My mom would say I was probably too rough. Kevin Mann used to call me tenacious. I remember scoring a goal. The ones I missed, I would get a little angry and bang my stick on the glass. My mom is very happy I grew out of that problem.”