U.S. set to compete Aug. 6-11 at the Hlinka Gretzky Cup in Red Deer and Edmonton, Alberta. 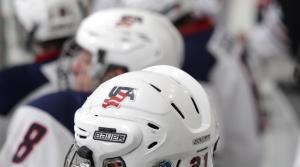 COLORADO SPRINGS, Colo. — Twenty-one players, including Illinois’ Luke Reid (Geneva, Ill.), who participated at the USA Hockey Boys Select 17 Player Development Camp have been chosen for the 2018 U.S. Under-18 Men’s Select Team that will compete Aug. 6-11 at the Hlinka Gretzky Cup in Red Deer and Edmonton, Alberta.

Newly rebranded as the Hlinka Gretzky Cup, the tournament is an annual event held each August for national under-18 teams from around the world. It’s one of the only true best-on-best international competitions for this draft-eligible age group and it represents the first major event on the scouting calendar each season for NHL talent evaluators. Eight members of the 2017 U.S. Under-18 Men’s Select Team were chosen in last week’s NHL Entry Draft. In all, 77 alumni of the Hlinka Gretzky Cup were selected by NHL clubs, including seven of the top 10 picks and 19 first-rounders.

NOTES: The 2018 Hlinka Gretzky Cup will be played in North America for the first time since 1996 … The competition will include teams from Canada, Czech Republic, Finland, Russia, Slovakia, Sweden, Switzerland and the United States … Team USA has finished in the top three of the Hlinka tournament 13 times since the tournament began in 1991. The U.S. earned first place in 2003, second on nine occasions (1993, 1994, 1996, 1999, 2000, 2006, 2010, 2013, 2016) and third three times (1991, 1995, 2014) … The 21 players on the roster represent 11 different states. Michigan leads the pack with five representatives; Minnesota is next with four … The annual USA Hockey Boys Select 17 Player Development Camp provides top young players with on- and off-ice training and instruction as well as the opportunity to compete at the national level against other top players from their age group.