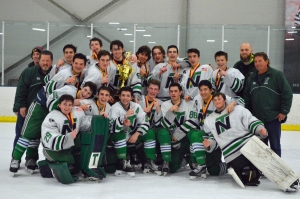 New Trier Green just continues to steamroll its competition, highlighted by a 3-1 win over archrival Loyola Gold on Sunday, Nov. 25, in the championship game of the 47th annual Loyola Thanksgiving Tournament, held in Wilmette.

The Trevians stand at 29-0 and remain the No. 1-ranked team in Illinois.

Green advanced to the finals with a 3-2 overtime win over Glenbrook North, while the Ramblers skated past Saint Viator 4-1 in the other semifinal.

In the Trevians’ first three games of the tournament, they outscored their opponents 21-1. Evanston scored once against Green, while Benet Academy and Maine Township were victims of shutouts.

“Being 29-0 and off to such a strong start is a great accomplishment, but not something we talk about. We continue to strive to get better each and every day.”

Green faces Gold once again on Sunday, Dec. 2 as part of the annual Quadheader at Centennial Ice Arena in Wilmette, benefitting Misericordia.

“It’s a great cause,” Melton said. “Any time we can raise money for something like Misericordia, it’s terrific. It’s a big game with two rivals that will draw a lot of people and I think it will be great night.”

Loyola Gold’s Patrick Weimer played a big part in this decision. He has been on the junior board at Misericordia for four years and has been an active volunteer with his mom. This year he is the Director of Outside Events where he runs events, such as parties for outreach and the Quad games.

‘Playing For a Purpose’ will be the slogan for the event and T-shirts will also be available.

Misericordia is a not-for-profit corporation which offers a community of care for people with mild to profound developmental disabilities. It currently serves more than 600 children and adults residentially on its 31-acre Chicago campus.

“I think it’s just a great organization,” Weimer said.  “It’s helping a lot of people in a lot of good ways.”

The Illinois High School Hockey Top 20 Rankings (as of Nov. 26), as compiled by Ross Forman