New Trier Gray is the school’s fourth varsity team, behind Green, Blue and White, but don’t think for a moment that these Trevians can be taken lightly.

Or Gray will win.

Gray skated into Thanksgiving with a 13-2-1 overall record, riding a 7-game winning streak. Gray lost its season-opener 3-1 to Evanston in a preseason tournament, and then didn’t lose again until Oct. 18, when Leyden slipped past Gray, 6-5, in Wilmette.

“The season has been going very well so far,” said Gray co-head coach Bobby Acri. “Gray (is) lucky to have a bunch of returners and a lot of upper-classman to lead the team. (The team) is very deep. We have four lines and six defensemen who all are capable of putting the puck in the net and contributing to the team’s success. We have great leadership with our returning players and captains which makes it easy for the coaches.

“We are very balanced and don’t have a ‘top line.’ We are big, strong, fast and can really wear down opponents with our fore-checking and physical play. Our scoring comes from all of the lines, which helps us attack other teams that aren’t as deep as us. Co-head coach Adam Cheris and I have a really good relationship, which helps us build off each other and have an extra pair of eyes on the game to make adjustments or fix the little things.”

Acri, 24, who lives in Winnetka, is the Director of Player Development for the Winnetka Hockey Club, Co-Director of Impact Hockey, and Co-Head coach of New Trier Gray and JV. He has been coaching full-time for three years.

Acri was, during the 2016-2017 season, an assistant coach for New Trier Green and White – and Green won state that season. He coached the same two teams last season, too.

He also coaches the 2006 and 2005 Central States teams at Winnetka. 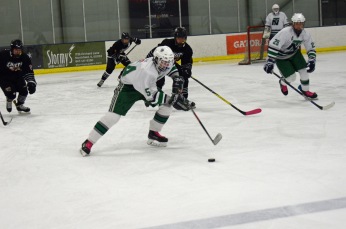 “I don’t think of (New Trier Gray) as coaching a fourth varsity because of the team we have,” Acri said. “Adam and I (are) lucky to come in to such a strong group of kids who, at most other schools, would be playing on the team’s top varsity team and contributing a great amount. We never bring up the fact that we are a fourth varsity team because the boys don’t care and neither do the coaches. We know we have a ton of very good players at New Trier and all they want to do is play hockey, compete and get better.

“We teach the kids the same systems as Green and White, so when they get the opportunity in the future to (play) for those teams, they are ready. We have a very good group of kids who don’t need a lot of motivation from the coaches. They are always ready to play, treat every game like it’s their last game and want to win just as bad as any other team at New Trier.

“We do a lot of skill work, but probably the same amount as any other team at New Trier. We spent a lot of time on teaching them the same systems as Green so there is some continuity within the program.”

Acri played for the Chicago Young Americans before returning to the New Trier program as a sophomore, skating that season for Green. He was a Green state champion in 2011. 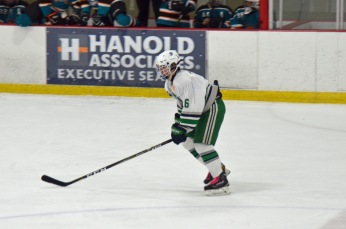 “Our discipline (on Gray) seems to be our biggest weakness so far,” Acri said. “In the games that we have lost, tied or were close, it was because of our lack of discipline and stupid penalties that get us in trouble. When we lose our ability to stay composed, it hurts this team and has led to our losses.

“It’s awesome to have the seniors stick around and play for Gray. They have made a huge impact with their leadership, not only on the ice but off the ice as well. They help bridge the gap between the coaches and players in the locker room.

“This team has a ton of potential. They have their sights set on upsetting someone in the Red Division of (the state tournament). It is nice to see their confidence so high, but they have deserved it and have earned the respect from other teams in our league.” 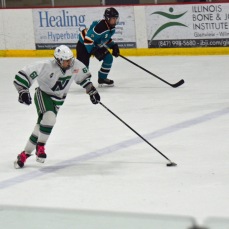 “It’s been a very positive (start to the season),” Acri said. “(We want to) continue to play (a) physical (game) and wear down teams using our balanced attack. We have to stay out of the penalty box and stay disciplined.”

Favorite NHL Team: Chicago Blackhawks
Favorite NHL Player: Patrick Kane
The 2019 Stanley Cup Champion Will Be: Nashville Predators
Hardest Slapshot on New Trier Gray: Carson Henderson
Most Accurate Shot on New Trier Gray: Christian Tegtmeier
Fastest Skater on New Trier Gray: Ross Kaminski
Best Coaching Advice: “Bob Melton has been a great mentor. With all the success he has had coaching at New Trier, I have learned a lot from him (over) the two years I coached with him. It was really nice to have such an amazing coach who I played for take me in and teach me all of his tricks and styles of coaching.”
Hockey Pet Peeve: “Going to the front of the line in practice for a drill and then messing up the drill.”
Hockey Superstitions: “Don’t have any.”