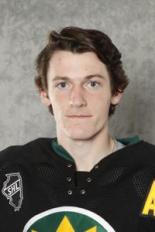 “His face in the locker room told me everything you needed to know about him as a Spartan,” Poulakidas said. “He took it tremendously hard and I think it resonated with the entire team. When you see one of your leaders in that much pain, you realize how important the team succeeding meant to him.”

A player can play for himself or play for his team. Burke chooses the latter, and the loss to Loyola stung for an additional reason.

“It was hard to watch that happen to our seniors,” Burke said. “To think about all the work we put in and all the seniors I’ve played with for so long — that was devastating. “In the past I didn’t want to let the seniors down and now that I’m a senior, I don’t want to leave the younger players on a bad note.”

Now in his fourth season as a varsity player, Burke provides a physical presence, a big shot, and stalwart defensive play for the Spartans. That’s a far cry from three years ago, when he roamed the ice as a 5-foot-4 freshman. Burke hit the mother of all growth spurts later that year and now stands at 6-foot-2 and 170 pounds. That growth turned Burke from a small freshman who largely had to avoid getting hit, to a player able to provide a physical presence on the ice.

“I take that seriously,” Burke said. “Any time one of our players gets hits hard or there’s controversy in the game, I take it personally to step up and be physical when I need to be.” 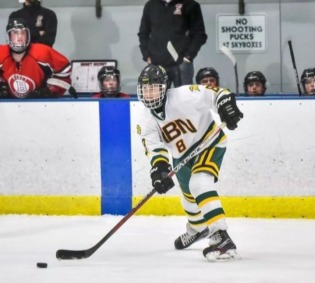 Burke and fellow senior David Wilcox make up one of the best defensive duos you’ll find anywhere in Illinois. The two have played hockey together since first grade and while Wilcox is good friends with the Burke he knows off the ice, he appreciates a whole different person once the skates are laced up.

“He’s a great guy off the ice — almost the opposite of what he is on-ice,” Wilcox said. “On the ice he’s a little bit mean and he plays with an edge.”

Currently ranked third in Illinois in Ross Forman’s Top 20, Glenbrook North relies on a defense that features Wilcox and Burke in front of goalie Brennan Nein. All three played on Team Illinois in September, along with teammate Mike Day, in a North American Hockey League showcase tournament Sept. 20-23 in Minneapolis, MN. Team Illinois went 4-0 in the tournament and Burke had six points in four games in front of scouts from various junior hockey programs. Burke enjoyed putting up some offensive stats in Minneapolis, but that’s never been what he’s all about as a player.

“I pretty much grew up as a defenseman,” Burke said. “I’ve always been more comfortable there and always felt like I could impact the game most on defense.”

Defensemen obviously aren’t showered with the accolades that offensive players receive, but they still enjoy the less obvious moments that stand every bit as important.

“For me, I love when it’s a two-on-one and I can slide and block the pass, or make a play that stops them from scoring. A big hit is also really nice, and small things like having a clean breakout. David Wilcox and I work well in our own zone to get our team going when we’re struggling to get it out. It’s a big help to the team and it’s important. Those small things help our team a lot.”

Poulakidas puts it simply: “Tim is important to every aspect of our team game,” he said.
Burke and Wilcox make up one of the best defensive duos in the high school game and Burke appreciates Wilcox’s smarts, ability to move the puck, and leadership.

Wilcox currently has 19 goals and 22 assists for GBN and is second on the team in points. He credits Burke for his role in those numbers.

“I can make plays knowing he’s going to be there without even looking, which gives me a huge advantage,” Wilcox said. “He’s a high-end defenseman. We’ve been playing together for so long and at this point we don’t even have to talk out there. We know exactly where each other is going to be on the ice.”

“I’ll miss going to practice every day. Everyone on the team is like my second family,” Burke said. “I love the sport of hockey. It’s a stress-reliever, a nice place to go whenever you feel frustrated, and I just love the culture of GBN hockey. “I love everything about it from the coaches to the players that play here.”

Like Loading...
‹ Latest News from the Metro Girls Hockey League
New Trier Must Regroup From Average December To Repeat As State Champions ›