The paths that Evan Giesler and Tucker DeYoung have taken during their hockey careers have almost been a mirror image.

The two Illinois natives faced off against one another while playing junior hockey in the NAHL: Giesler with the Bismarck Bobcats and DeYoung for the Aberdeen Wings.

When it came down to choosing a college to earn an education and play hockey, the two went nontraditional routes.

“When I was in juniors, I was looking at different schools and programs, and I told myself if Army or Air Force ever tried to recruit me, I’d just tell them I wasn’t interested because that’s not something I wanted to do,” said Giesler, who played high school hockey at Naperville Central. “Lo and behold, the Air Force wanted to come and talk to me and then I convinced myself, oh, maybe I’ll just go on a visit and see how I like it. If I still don’t like it, I can tell them that I’m not interested. I came here and after my visit I fell in love with it and I wanted to come here. It’s kind of funny how it goes full circle like that. 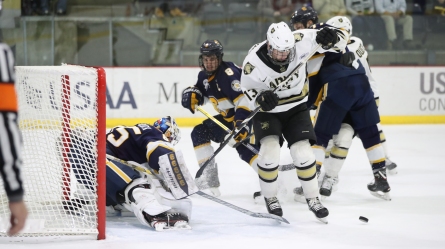 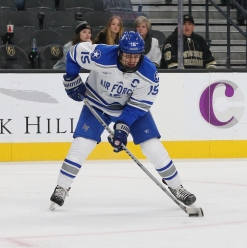 Giesler, team captain, is now in his fourth year at Air Force and is the fifth-leading scorer for the Falcons this year. He will graduate in May.

DeYoung played in high school at hockey-rich Culver Academies in Indiana. When he left the straight-laced school for juniors, he was certain he didn’t want to have anything do with attending a service academy such as Army.

“A few of my friends had gotten into West Point and the Navy and they were going to go to service academies, but I needed a break and I can’t do the uniform again,” DeYoung said.

After playing for Aberdeen and then the New Jersey Hitmen, DeYoung started to see friends graduating and having a hard time getting jobs.

“I realized the importance of education and that also gave me time to reflect on my time at Culver and I realized I enjoyed it a lot more than I thought,” DeYoung said.

One of DeYoung’s best friends at Culver went to West Point. DeYoung, a Lake Bluff native, had a long discussion with his family about what was best for his future.

“I thought West Point gave me the best opportunity to succeed later on in life,” said DeYoung, who is a sophomore this season on the Black Knights. “Even though it was going to be hard at the time, it’s important when you get older to look at your future and not what’s going to be fun for the short term.

“West Point was a great combination of academics and school and also gave me a chance to serve my country, which were three things I was looking to do.”

Going to a service academy means putting in the time commitment for military activities and school. For Giesler and DeYoung, they also have to juggle playing hockey at the Division I level.

“It’s just something you learn to deal with,” Giesler said. “You come from juniors where pretty much the only thing you have to do is play hockey and you’re done with practice at 1:30-2 in the afternoon and you’ve got the rest of the day to do whatever you want. It’s a pretty big culture shock when you come here as a freshman and you’ve got military obligations and you’ve got school and you’ve got hockey. We bring tutors on the road to help us out with schoolwork and they’re really helpful with making sure that we’re staying on top of our school stuff.”

DeYoung, who will graduate in 2021 with a systems degree, said the biggest adjustment was having to concentrate on more than just hockey.

“You’ve got school number one, then being in the Army number two, if that’s not number one, and then hockey’s third,” DeYoung said. “It takes a little bit of a backseat, but at that same time it allows us to broaden our horizons and grow as individuals.”

DeYoung started skating at 4 years old and played for the Falcons Hockey Association in Highland Park. As a pee wee, DeYoung played on a Falcons team that went undefeated until the state title game. He then played for Team Illinois from sixth to eighth grade before heading off to Culver.

DeYoung’s experience with youth hockey in Illinois was invaluable.

“Illinois has so many great coaches and skills coaches compared to a lot of other different places in the U.S.,” DeYoung said. “I was really able to grow as a player and develop at a young age. When it was time to play at a higher level, I was really prepared and I was able to excel.”

Giesler played for the Naperville Sabres growing up. As a senior in high school, Giesler skated for the Chicago Fury where he attracted interest from the Bismarck Bobcats.

Having played hockey in Illinois, the first 13 years of his career provided Giesler with a solid structure and valuable lessons he continues to use to this day.

Both Giesler and DeYoung are open to offering any advice to young hockey players in Illinois who are thinking about applying to a service academy and playing hockey.

“I would say probably keep your grades up because obviously you have to be good at hockey and you have to be passionate and committed to the sport,” Giesler said. “But if you don’t have good grades, that will limit your options, not just service academies, but college hockey in general.”

“West Point is a great opportunity to grow as a leader and set yourself up for the future, but you also get an opportunity to play hockey at the highest level,” DeYoung said. “I think it’s important to look at all your options.”

Categories: Alumni in the News, Hockey Headlines, NCAA Division I