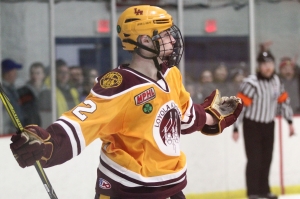 Loyola Gold’s Declan Darcy was honest when asked what he saw when he looked up from the puck, just before scoring a series-ending goal in double overtime against Glenbrook North.

Two Scholastic Hockey League semifinal playoff series that kept hockey fans strapped into a roller coaster ended in identical fashion on Sunday, Feb. 24. Darcy’s goal came in the second overtime of a deciding third game to give the Ramblers a 2-1 win over the Spartans on Loyola’s home ice in Lincolnwood.

Mere minutes later and 10 miles north in Northbrook, Gavin Randle scored his game-winner against York — also in double overtime and also in the deciding third game of a best-of-three series.

Afterwards, Glenbrook North coach Evan Poulakidas said that he believed winning the Scholastic Cup is harder than winning the state championship, due to the consistently high level of play needed to win a best-of-three series.

“I agree with that, honestly,” Darcy said.

New Trier is the top-ranked team in Illinois per Ross Forman’s Illinois Top 20, but the Trevians needed everything they had to get past York. The Dukes won 5-2 in game one before the Trevians won games two and three, both in overtime, by scores of 3-2 and 2-1.

Preston Chang gave New Trier a 1-0 lead in the first period of game three before York tied the game with a power-play goal in the third. Randle scored during three-on-three double overtime to end the night.

New Trier goalie Preston Watt was rock-solid and made 19 saves in the deciding third game, against an eighth-ranked York team that scraped and clawed throughout.

“They skate hard no matter what,” Watt said of York. “Skill level doesn’t matter, or anything like that in these playoffs — any team can beat any team. It’s whoever skates the hardest and can put some pucks in the net.”

York assistant coach Shawn Brown applauded Watt’s effort when it counted most in the series.

“He played great. He was a stud for us tonight,” Brown said. “He made some big saves all night and I think their only goal was on a power play. He played spectacular.” 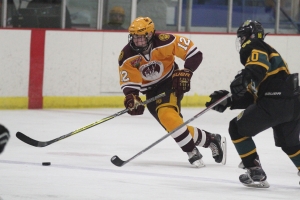 Second-ranked Loyola won 3-0 over third-ranked Glenbrook North in the first game of their series before the Spartans evened the series with a 3-1 victory. Loyola coach DJ Lavarre wasn’t happy with his side’s effort in the game two-loss, but the Ramblers answered the bell in game three.

“Better intensity today and better effort,” Lavarre said. “GBN played well, I thought we played well and we had a number of opportunities. Their goalie (Brennan Nein) played really well.

“We took a few bad penalties late in the game and sometimes the tendency in that situation is to self-destruct. We didn’t self-destruct so kudos to us. Because at this time of year you need to bend but not break.”

Loyola’s Eamon O’Brien put his side up with a goal in the second period before Glenbrook North’s Matt Dahlke answered to tie the game heading into the third period.

A scoreless third period and 10-minute overtime period ensued before Darcy scored during the three-on-three second overtime. Afterwards, he pointed to his side’s loss in game two as a launch point.

“The loss to GBN — we needed that,” Darcy said. “It woke us up, honestly, and made us realize that anything can happen. Our season can end because it’s a one-game elimination at state, so that loss was big in preparing us.”

The SHL championship series between Loyola and New Trier begins on Sunday, March 3, with a 3:15 game on New Trier’s home ice at the North Shore Ice Arena in Northbrook.New Trier holds a 3-1 advantage over Loyola in their four meetings this season.

“I’m really excited about playing that team,” Watt said of Loyola. “They play similar to us and it’s always a challenge. They have four lines that can skate hard, and they’re skilled.”

Congratulations to the SHL Award Winners for the 2018-2019 season!