Mason Berg Proves That Hockey Truly Is For Everyone 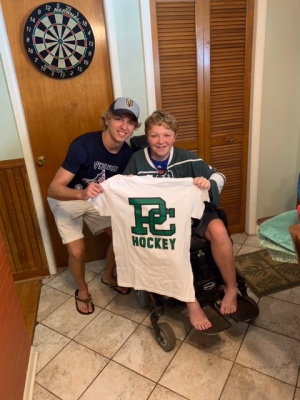 Mason Berg is a 13 year old boy who loves the sport of hockey. Mason lives with a form of Muscular Dystrophy, but this does not stop his dream of playing hockey. Mason met the entire Chicago Blackhawks team about a year ago and was able to go out and practice with them. Every year he attends the Muscular Dystrophy Association Summer Camp in Hudson, Ill., with one thing on his mind: winning each game of hockey against the other campers. From knowing player and team statistics about every NHL team, to attending as many hockey games as possible, Mason is one of the biggest hockey fans out there.