Other than their season-opener, which was a 5-0 road loss to the Fox Valley Hawks, D211 Chiefs Varsity Grey has been in each of its first eight games. Their record only stands at 2-4-2, yet in each of their three other setbacks, it’s been either a one- or two-goal game.

Optimism is still skating strong for the Chiefs.

“(We) have a great group of kids this year; we have to work on blending the different backgrounds into one,” said Chiefs head coach Bob Veller, 46, in his 23rd year coaching – his 7th with the Chiefs.

The team looks to improve on last year’s 6-12-6 league record.

“We need to be more consistent in play and be hard to play against when facing the higher level teams. The individual skill that we have (this year) over past years really stands out.”

Veller, who lives in Buffalo Grove and is the Rolling Meadows Park District Superintendent of Ice Arenas, said his team has individual talent and strong personality, which will be key during its North Central season.

“It’s (only) October, so hard to tell without playing everyone yet,” how good the team will be, he said. “In a recent game against Fox Valley, it was back and forth the second part of the game, ultimately ending in a tie, 5-5.”

This was the same team that drowned the Chiefs, 5-0, less than a month earlier. 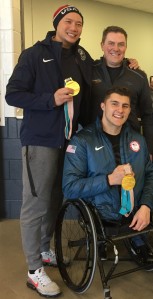 “I think that our (key) players need to step up to match the speed of the game. It’s new for a lot of our players and will take a little time to get to speed, but I think they are adapting well for a month into the season,” Veller said.

The Chiefs also will rely on sophomore forward Matt Ruzanski (Fremd), who Veller acknowledged will be one of the team’s go-to players on penalty kills. “He did a great job last year on our second team and has continued that early (success) this year,” Veller said.

Jake Ratner also is a key skater for the Chiefs. “(I) always am amazed at his patience and how the puck stays on his stick. He makes some great plays at just the right time for us. I am looking for to seeing what he can do the rest of the season,” Veller said.

Alex Masouridis could be the breakout star. “Once Alex gets his stride with this group, he will be fun to watch.  He has great intensity and knowledge of the game,” Veller said.

The Chiefs’ first two wins this season were over Lane Tech and LZMW.

“I like the (North Central) Division. I think there will be a lot of good competitive games this year,” he said. “With (so many) teams being close in talent, I think that it is going to be a close race down to the last week of the season.”

On The Bench With … D211 Chiefs Head Coach Bob Veller