Girls United Hockey is Back and Looking to Build Off Success 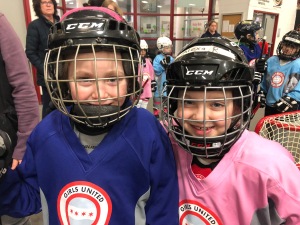 By Greg Bates, Special to AHAI – When Girls United Recreational League (GURL) Hockey was formed last year, there were plenty of unknowns going into the first session.

Would the program be well received by the girls ages 4-10? Is having instruction solely designed for young girls’ players a great route to attract new players? Would the parents approve of the unique approach with their daughters?

The answer to all these questions was a resounding, “Yes.”

Year 1 was overwhelming, yet extremely positive for organizers. With Year 2 right around the corner, Girls United is ready to continue in the right direction.

“The first thing we’re trying to do is build on the momentum that started last year,” AHAI Director/Co-Chair Girls United Program Chuck Smith said. “Really what we learned last year was our sense that giving young girls the opportunity to be introduced to hockey in an exclusive girls’ environment has great appeal, not just to the young ladies, but also to their parents.”

Last year’s sessions were so successful, the number of participants had to be capped. With two locations in early 2019 — in the south and west suburbs of Chicago — 85 kids were able to get on the ice, skate and learn the game.

This coming season, a third location was added, in the north at the brand-new Robert Crown Community Center in Evanston. The rink features two sheets of ice.

“I think last year that was something we were asked about quite a bit,” said Tracy Cimba, program co-chair. “People were wanting something in the northern part of the city. I just don’t think we were ready to roll it out so quickly last year. We wanted to make sure we had staffing in place and that the model works before we expanded it. This year, we’re feeling really comfortable and families are happy.”

Said Smith: “Going to Evanston, we’re hoping to draw from a more diverse socio-economic background then by going to the far west or far south suburbs.”

The other two locations will be in Crestwood and Hoffman Estates.

This year, Girls United will be able to tailor to 150 skaters — 50 at each location. Smith is expecting some of the same faces who took part in the program last year, but also skaters new to the sport.

“One of our goals was to grow the pie, grow the number of participants and not just rearrange the furniture and have girls that are already in the system now skate in the girls-only environment,” Smith said. “What we tried to do is draw in young ladies who had not previously been in the system and had never tried hockey. We wanted to bring those girls in so that literally the number of participants was growing.”

With 50 skaters anticipated at all three locations, Cimba would like to see a five-to-one players-to-coaches ratio on the ice. The more individual instruction the better in the American Development Model (ADM)-style, on-ice curriculum.

“Getting staff on the ice to corral 50 little girls that are new to skating, that was something we didn’t expect,” Cimba said. “We’re going to be really pushing for student coaches to get more involved as well. It’s great for them and great for their volunteer hours to give back.”

Girls United, which is offered to players who aren’t currently enrolled in a USA Hockey affiliate program, is designed for girls ages 4-12.

The success of the Girls United program happened so quickly last year; organizers were slightly caught off guard. Now, this year, they are prepared and know what to expect.

“I believe we’re prepared, and we were pleasantly surprised by the reception it got last year,” Smith said. “We were hopeful, but surprised. This year, I think we have more of an expectation, but we’re going to remain flexible.”

Registration launched the first week in December and the first sessions start in Evanston and Hoffman Estates on Jan. 11 and Crestwood on Feb. 2. The cost is $79 for each participant.

With a lot of excitement surrounding the start of the winter sessions, there has been continued discussion about adding programming in the fall. Cimba said a lot of the volunteers who are involved with Girls United have busy schedules during that time of the year. However, that avenue will continue to be discussed.

“We would love to do more sessions, so our next big goal is to continue it like a fall session and a winter session,” Cimba said. “We’re super excited we’re able to move forward and that it was a big enough success that it was like, ‘Yeah, we have to keep this going.’”